How to Read A Seed Packet for Beginners

With gardening being one of my favorite hobbies, I tend to do a lot of research about it. While doing research I’ve found a common first-time gardener practice. A person purchases a packet of seeds and then proceeds to dump the entire contents into a pot. Of course, they’re ecstatic to show off their 100 seedlings growing in a 6″ diameter pot. But should those seedlings be thinned a bit? And how many are really needed to be planted at the beginning? Typically, those questions can be answered on the back of the seed packet. It’s a lot of information to take in on a 3-inch by 4.5-inch piece of paper, but it can really help you with your gardening. Let’s dive into how to read a seed packet for beginners. 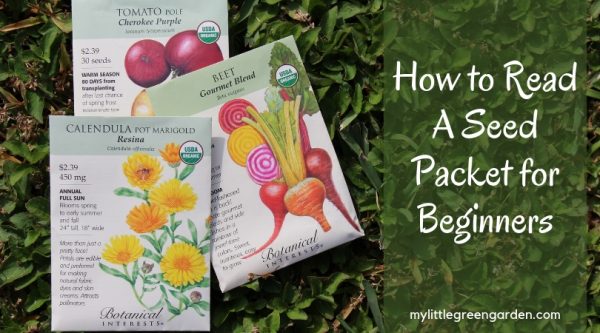 Every company designs its seed packet layout differently. But generally speaking, each seed packet will cover 4 areas: a description of the seed being sold, when to plant the seeds, how to plant the seeds, and what to expect from the plant you’re growing. Descriptions can include flavor, color, history, or even meals that are typically made with the produce. Unless, of course, the seeds aren’t producing something that’s edible.

Each seed packet should also have a date stamp on it which will let you know when the seed packet was created. There can sometimes be two dates – a packed-for date, and a sell-by date. Most seed packets can last for a few years when stored in a cool, dry, and dark place. I personally prefer to store mine in a Seed Packet Organizer.

There are many different types of seeds – organic, non-GMO, heirloom, hybrid, and open-pollinated are a few buzz words so let’s define each.

When to Plant With Your Seed Packet

When picking up your seed packet you will see information about when the right time is to plant your seeds. There are multiple ways that this information can be explained, and we’ll cover some of the ways you’ll be able to decipher this including seasons, frost dates, and map keys.

Some brands of seeds packets, like Botanical Interests, will list if your seeds are for cool seasons or warm seasons. Warm-season crops are more sensitive to cold weather and don’t survive freezing temperatures. This means when temperatures go below 40 degrees Fahrenheit, I cover my plants with frost blankets. It also means I try to plan my warm-season crops so that they’ll be harvested before the average first frost in my area.

Cool-season vegetables thrive in cooler temperatures and actually taste better when temperatures are low. If you try to grow these vegetables when it’s warm out they can taste bitter and bolt (which means they start producing seeds to flower). They can be broken out further to show if they can handle light freezes or hard freezes which you can check out here.

Some seed packets will list if the seeds are considered cool-season or warm-season, while others may leave that off and just mention when to plant. For those that leave it off, here is a general list of each.

When to Sow and Frost Dates

Frost dates play a big role when it comes to planting, and most seed packets will reference frost dates. Seeds packets will either tell you when you plant based on first or last frost dates, soil temperature or even plant hardiness zones.

For example, this beet blend recommends 2 to 4 weeks before average last frosts or planting during the late summer. It also says zones 10 and 11 can sow fall through winter. I’m in zone 9b. That’s pretty close to zone 10, so I would feel comfortable planting beets in the fall and harvesting during the winter. They can handle light freezes but may be more sensitive to hard freezes, which is why they recommend planting towards the end of winter (for areas that actually experience a winter).

It’s important to be aware of your first and last frost dates. Averages can help, but you should also pay attention to the weather as you get closer to your typical first frost date. Here’s a quick guide that shows when the average first and last freeze dates are for your planting zone. These are pretty generalized since planting zones cover a wide area, but they can give you a ballpark idea.

You can also use the Farmer’s Almanac to look up your average first and last frost dates based on zip code. But again, every year is going to vary, and paying attention to your local news will be the best way to prepare.

Some seed brands will use a map key so that you’ll be able to quickly find your region and the corresponding color code that will tell you what months are appropriate for you to plant your seeds outdoors for your area. For example, according to this Burpee seed packet, I should be able to plant tomatillos between March and May, and from July to August. Being in Florida, I would lean more towards planting in March or August since our summers are exceptionally hot. 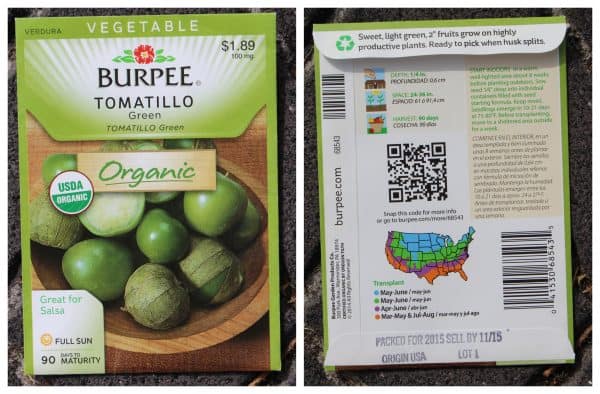 How to Plant With Your Seed Packet

Your seed packet will also explain how to plant your seeds by listing some basic, but brief, information. Information can include whether you can start your seeds indoors, light requirements, seed planting depth, days to germination, quantity to plant, thinning, and spacing requirements.

Some seeds can be planted indoors and then transplanted outdoors. For example – the calendula packet pictured above states that it can be started indoors before planting outside. Other seed packets may state that it isn’t recommended for certain varieties to be transplanted (like squash) because the root is more sensitive and the plants don’t transplant well.


Some seed packets will mention if the plant needs full sun or partial shade. Some will even say how many hours per day the plant should receive. Most vegetables need around 6 to 8 hours a day.

Most seed packets will mention seed depth, which is how deep the seed should be planted, and then covered in dirt. The calendula seed packed above mentioned 1/4″ to 1/2″ for the seeds. Most seeds should be planted anywhere from 2 inches deep to directly on the surface and gently pressed into the soil (because they need light to germinate).

When seed packets list how long it takes for your seeds to germinate or emerge, it is helpful for you to have a realistic expectation. Some seeds take longer than others. Some take less than a week, while others can take over three weeks. For example, the calendula seeds are expected to germinate 5 to 15 days after being planted. This means you won’t see anything green popping up for 5 to 15 days. But you should continue to water the soil in expectation of having a seedling in a couple of weeks.

Quantity to plant is what I see sometimes done in excess among beginner gardeners. You typically don’t need to plant more than 5 seeds in the same spot (unless you’re planting a cluster of seeds for something like chives or chamomile). The reason for this is the germination rate. How many seeds will germinate that are planted? You’d hate to plant 1 seed and then wait 3 weeks just to find out that nothing happened. Some seeds don’t germinate, which is why sometimes the seed packet will list a number to plant. For example, the calendula seed packet says under seed spacing to plant 3 seeds every 12″. This means planting 3 seeds in the same spot. The reason for 3 is that there is a chance that 2 out of 3 won’t germinate.

The seed packet will then list a thinning distance, which in this example states after the seedling reaches 2 inches tall it should be thinned to 1 plant every 12″. Once the seedling(s) have germinated if there’s more than one that germinated, then the extra should be thinned. Thinned means to remove the other one or two seedlings that grew so that you only have one left. The best way to remove those other seedlings is to cut them towards the top of the soil with scissors. If you pull the seedling up it can disturb the tiny roots of the seedling that you don’t want to thin.

What To Expect With Your Seed Packet

Once you’ve planted your actual seeds, your seed packet will probably give you a few details on what you can expect as your plant grows. Some of those details can include if your seeds are annuals or perennials, how many days to harvest, size, and other growing tips. 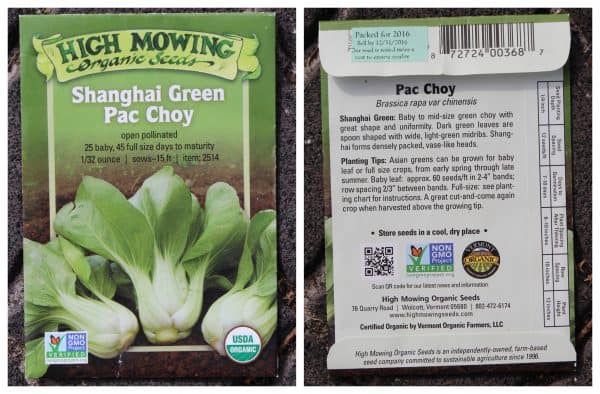 If you’re growing flowers your packet will probably mention if the flowers are annuals or perennials. Annuals live for one growing season and then die, while perennials will regrow for multiple years.

Seed packets will sometimes also mention the size of the plant. The spacing should give an idea, but sometimes an actual plant size will be listed. Flowers should have heights listed. 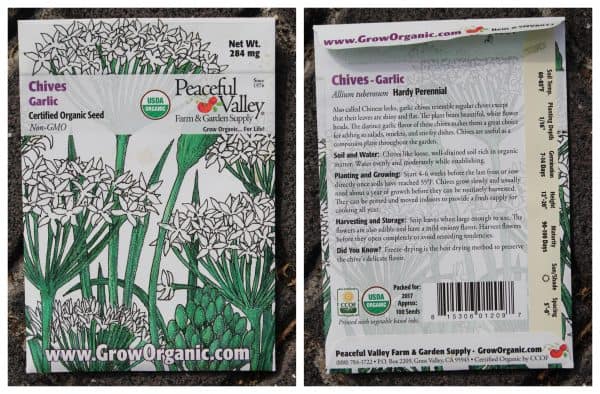 Seed packets can also include extra growing tips like special germination instructions, the frequency of watering required, or soil quality that will make your plant’s growing conditions optimal.

Do you grow your plants from seeds? Comment below!