Skip to content
Home Garden Tips General Gardening Is There a Blotch Leafminer in Your Garden?

Is There a Blotch Leafminer in Your Garden? 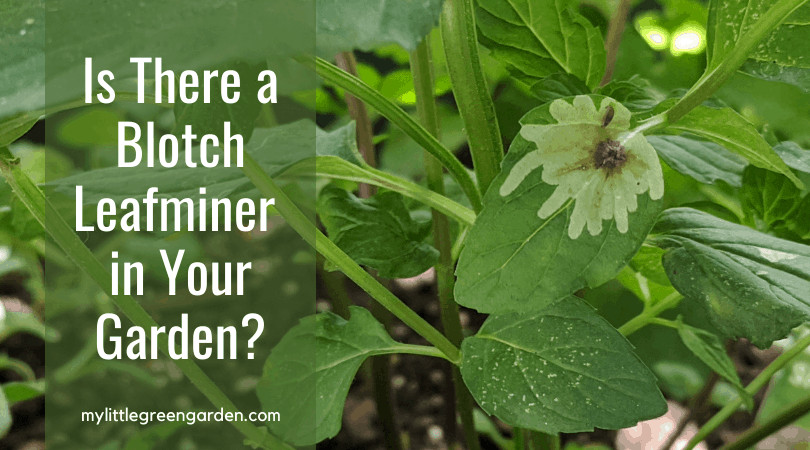 The term leafminer is a catch-all that describes the larvae of multiple species. The larvae live inside plant leaves, feeding and growing until they reach maturity. Insects that have developed this habit include moths, beetles, sawflies, and flies.

Leafminers are typically classified by the pattern they create. Serpentine leaf mines trail snake-like across the leaf gradually widening as the insect grows. Blotch leaf mines are irregularly shaped circles that will grow.

The adult is a small, black, clear-winged fly. Larvae are yellowish-white and about 3 mm long. And white eggs can be found on the underside of the leaves. The adult lays their eggs on the leaf. Then larvae burrow into the leaf and tunnel through it, feeding and leaving a transparent trail of where they’ve been. 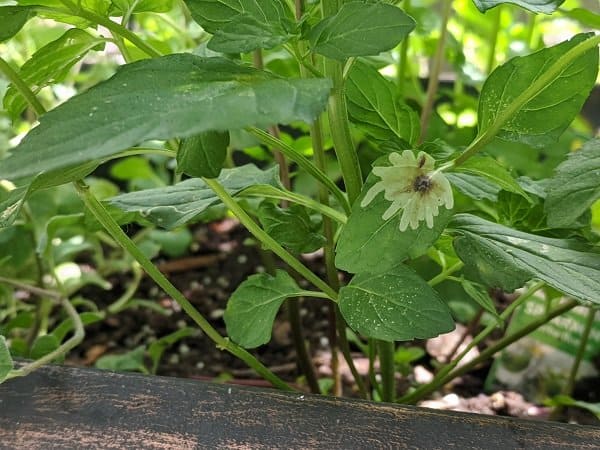 By understanding the leafminer lifecycle, you can know what to expect and how to deal with them. In the winter, mature larvae will overwinter in the soil beneath your plants. Then in the spring, they begin their pupal stage, and by mid-spring they become adults.

Once mature, a mated female leafminer will lay roughly 250 eggs. There are actually two different types of egg-laying, those that lay their eggs simply on the underside on the leaves that are easy to spot, and then those that actually insert their eggs within the leaves, which are more difficult to find.

After 10 days, the leafminer eggs hatch, and the larvae will start eating their way through the leaf tissue, which is when you’ll start noticing the damage.

Larvae take about 2-3 weeks to mature. When they’re ready to pupate, some will do so within the leaf mine, while others will leave the leaf and pupate in the soil. Then 15 days later, they emerge as an adult fly.

Because the lifecycle is so quick, you can have multiple generations of leafminers in one year.

Detecting the Blotch Leafminer in Your Garden

The damage done by the blotch leafminer is often mistaken for some type of disease. 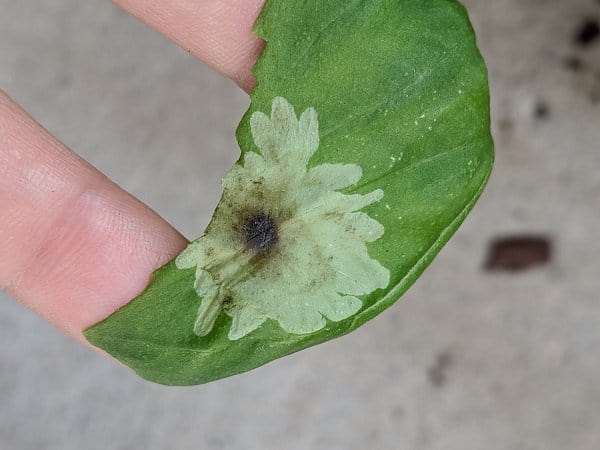 Blotch leafminers make blotch-like tunnels within leaves where the larvae feed. You will probably notice more damage on lower leaves first. At first, you will see a small black spot. The black spot will then start to grow, and the leaf will seem to separate making it appear that there is something inside the leaf. You might also start to see a few whiteish trails leading from the black spot, like a starburst.

According to the University of Florida, “feeding larvae cause conspicuous blotch mines in foliage before they emerge and pupate externally. Injury to foliage by mines and oviposition punctures causes a plant to be unsightly. Heavy infestations may cause some leaf mortality. Three to six larvae are common in a single leaf, frequently forming a large community mine.”

The damage done by blotch leafminers is mostly cosmetic, though it is possible to have a severe enough infestation that can stress or weaken the plant. The mine tunnels can pave the way for bacteria and disease, and the leafminers can potentially spread this.

Deterring the Blotch Leafminer in Your Garden

There are multiple ways to deal with blotch leafminers. You can also opt to not deal with it at all. You can probably get away with not doing anything and still harvest a decent amount of your crop. Blotch leafminers, unlike say, the tomato hornworm, won’t eat you out of house and home. But they do make leaves unattractive, and if your goal is to eat the leaves (like basil) there are a few different things you can do. 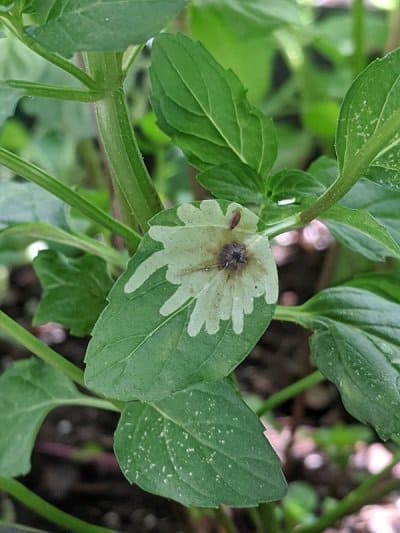 Did you know sick and damaged plants are more susceptible to pests? By simply keeping your plants healthy with regular watering, organic fertilizer, and weeding, you can take measures in preventing pests from damaging your plants. This won’t keep your plants bug-proof, but it will make them much more resilient.

The first option is to pick off the affected leaves and dispose of them. Once you see tunnels or blotches, that plant tissue is already dead and it isn’t going to grow back or improve in appearance. Since damage is mostly cosmetic, removing the leaves will be the only way to improve the current state of your plant’s appearance. But this isn’t just a defensive strategy. By removing the leaves while the insects are still in their larvae stage, you can prevent them from maturing and laying more eggs. This strategy requires you to pay attention to your garden to see what’s going on.

If you’re able to find the eggs on the underneath sides of your leaves, you can remove them. The more eggs that you remove, the fewer pests you’ll have to deal with. Spring is a great time to start inspecting your plant leaves for any signs of pests since this is when most insects resurface.

Row covers can help to stop adult flies from laying eggs on your leaves. Row covers are inexpensive and can also help in areas where there are high temperatures in the summer. They’re also sometimes referred to as shade cloths.

Sticky traps are another method that can attract and trap the adult pests before they have a chance to lay their eggs on your leaves.

Neem oil is a non-toxic organic pesticide that can be diluted and sprayed on plants to stop the growth and development of pests. This insecticidal oil does not kill infestations immediately and works best as an early preventive measure. Once the leafminer is inside your leaf, spraying the outside of the leaf isn’t going to help much. If you know that a certain plant is susceptible to leafminers every year, you can target the adults before they lay their eggs by spraying neem oil in the early spring.

Be aware there are a lot of neem oil sprays that use very little neem oil and include a lot of other questionable ingredients. I prefer to get 100% neem oil and then dilute that with water so I know exactly what’s going onto my plants.

You can also use predatory wasps. There is a type of wasp called diglyphus isaea. It’s a beneficial insect that kills mature leaf miners before they can lay their eggs. These predatory wasps are only 2 millimeters in size and do not sting human beings. These wasps feed on leaf miners and other small destructive insects. They can actually be purchased (like other beneficial insects), but I would only recommend them to gardeners who have larger amounts of land. 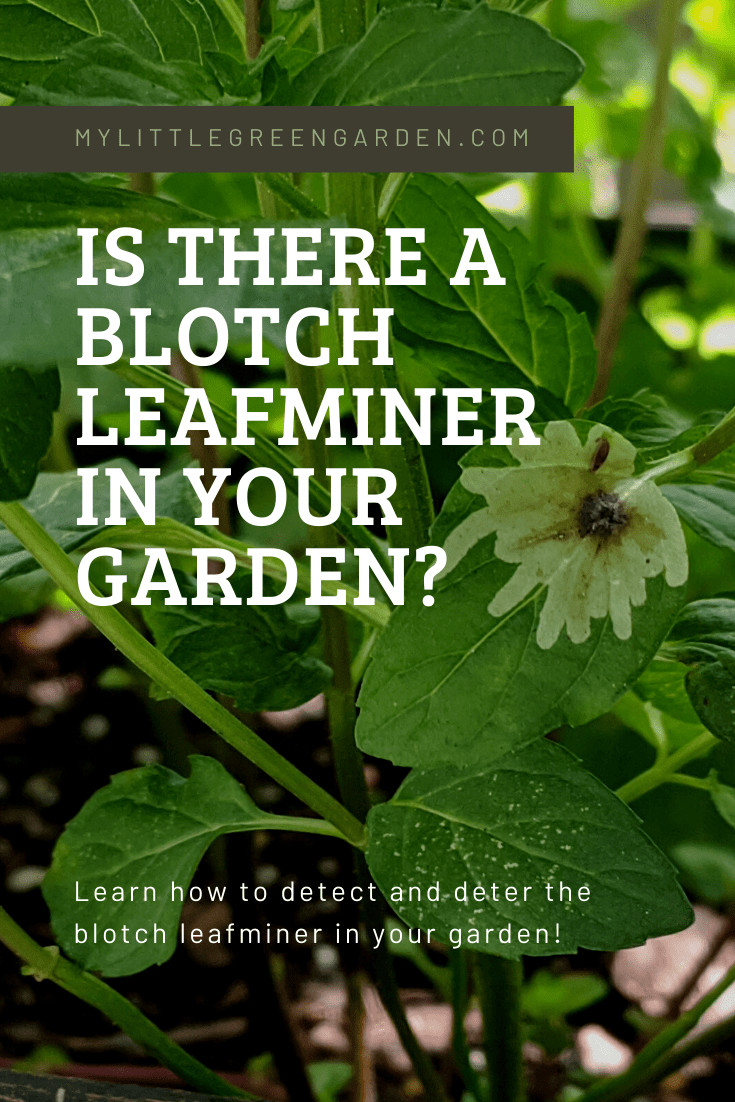 The key to getting rid of the blotch leafminer in your garden is to prevent it before it starts. I recommend paying close attention to your plants in the spring, pinching off leaves when you start to see blotches or tunnels, and using a natural spray like neem to prevent further damage.

Have you ever spotted a blotch leafminer in your garden? Comment below!