Skip to content
Home Garden Tips General Gardening Is it Time for a Victory Garden?

Is it Time for a Victory Garden?

When this pandemic started to grow, as grocery shelves became bare and supply chains dealt with something that they didn’t see coming, many people began to worry. And that’s when it started to happen. Seed suppliers started to see a HUGE increase in sales. All across the world, people have started to grow their own gardens. A desire for self-reliance has begun. And because of the interest in backyard gardening amidst COVID-19, the term “Victory Garden” has been gaining momentum. 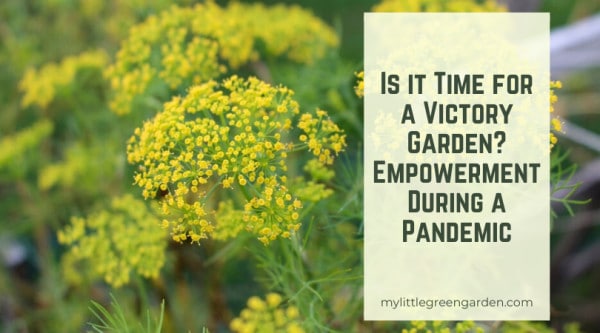 During times of war, victory gardens became popular. To lessen the load on the system, to become a little more independent, and to ensure food was provided for families and neighbors. There is a certain degree of freedom and empowerment that comes with self-reliance. Are you ready to start your own victory garden?

Victory garden was a term used for backyard gardens during WWI and WWII when the agriculture and food industries took a hit. While we’re not exactly at war, at least not in the same way as before, the impact of what is going on is happening at a global scale, similar to the world wars.

During World War I, a severe food crisis emerged in Europe. Farmers were recruited into military service and farms were transformed into battlefields. Food shortages began because of this. And then a campaign started. In 1917, weeks before the United States entered the war, Charles Lathrop Pack organized the National War Garden Commission to encourage Americans who hadn’t gone away to war to contribute by growing their own fruits and vegetables. This allowed more food to be exported to the Allied nations. Citizens were urged to utilize all idle land — including school grounds, parks, backyards, and any other vacant lot.

The war garden movement was encouraged through propaganda posters. Amateur gardeners were provided instruction pamphlets. Families were also provided information on canning to help preserve surplus. The federal Bureau of Education then initiated the US School Garden Army  (USSGA) to educate children. As a result of these programs, 3 million garden plots were planted in 1917, and 5 million in 1918. 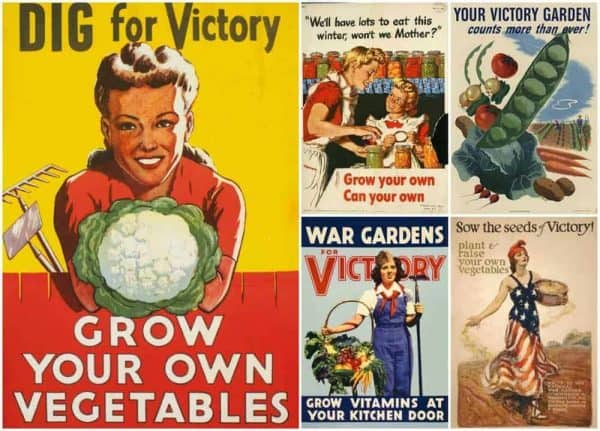 By the end of WWI, these war gardens became referred to as “Victory Gardens.” After the war the campaign ended, but many people continued to maintain their gardens, and it’s a good thing they did.

During WWII, once again farmers were enlisted, and transportation was redirected towards moving troops instead of moving food. So the public was called upon once again to grow “Victory Gardens.”

Food rationing was introduced to the US in 1942, so Americans had more incentive than ever to grow their own. This allowed families and communities to sustain themselves during tough times. But the benefit of victory gardens wasn’t just to put food on the table. It boosted morale. It brought communities together as they shared what they had. People wanted to feel productive and self-reliant. During both world wars, victory gardens helped prevent food shortages and ease the burden on commercial farmers who were feeding troops and civilians overseas. Some of the most popular produce grown included beans, beets, cabbage, carrots, kale, kohlrabi, lettuce, peas, tomatoes, turnips, squash, and swiss chard. 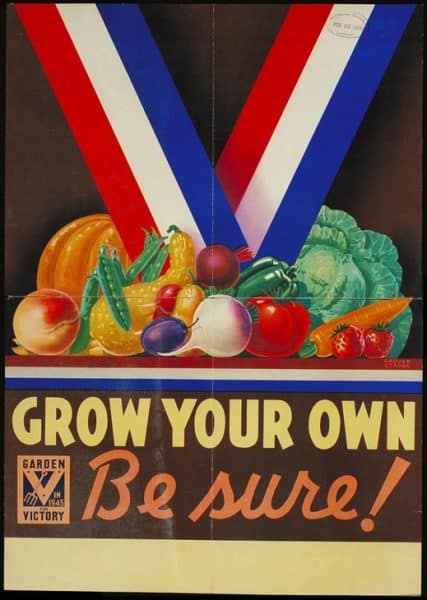 In 1942, 15 million families had planted a victory garden. And by 1944, an estimated 20 million victory gardens produced roughly 8 million tons of food — more than 40 percent of all the fresh fruits and vegetables consumed in the United States.

The government’s promotion of victory gardens ended with the war, but local gardening has been gaining popularity again in recent years. There’s a desire for self-sufficiency, consumption of local organic food, and sustainable agriculture practices that won’t harm the environment.

Victory gardens are a symbol of self-reliance, empowerment, food production, and community. Today less than 2% of people identify as farmers, varying between Big Ag and small entrepreneurial ventures. Times have changed, but if you have a backyard, a patio, or even a windowsill, you can start your own victory garden today.

Benefits of Starting a Victory Garden

Call it what you will — victory garden, liberty garden, kitchen garden, or backyard garden. This little plot of land is yours! And you can grow whatever you want. Having your own garden gives you an opportunity to be empowered and a little more self-reliant. There are no middlemen. You don’t have to wait for transportation trucks. There’s no dependency on a system that you have no control over. And there are so many benefits!

What you grow in your own garden can be some of the freshest, most nutritious food you consume. Food loses its nutritional value when it is processed and modified. That’s why it’s important to eat whole foods in their natural form. It’s also better if you can eat food as soon as possible after it’s harvested. As food ages, it loses its nutritional value. By the time you purchase produce at the store, weeks and even months could have gone by. For example, conventional apples are harvested before they’re ripe and sprayed with a chemical called 1-methylcyclopropene. This chemical allows your apple to be stored for MONTHS before it ever ends up at your supermarket. Seriously. It’s better to eat locally grown.

And that’s not even getting into GMO food and the benefits of eating organic. I’m not comfortable with the thought of someone wearing a hazmat suit to spray my food (to the point that the food actually needs to be genetically modified to withstand the number of chemicals they’re being treated with to not DIE 😳). That food continues to carry residues of neurotoxic chemicals that are known to harm your cells, weaken your immune system, and cause cancer and other life-threatening illness. Oh yeah, and it harms the environment.

Some things are completely out of our hands, but the food we eat doesn’t need to be one of them. We can each do our own research and decide for ourselves what we’re comfortable with and what we’re not. The EWG is a great site that I reference a lot. Some of the things they review include household cleaners, beauty products, sunscreen, food, and water. Check out the EWG’s “Dirty Dozen” and “Clean 15” report for more information on the produce you consume. 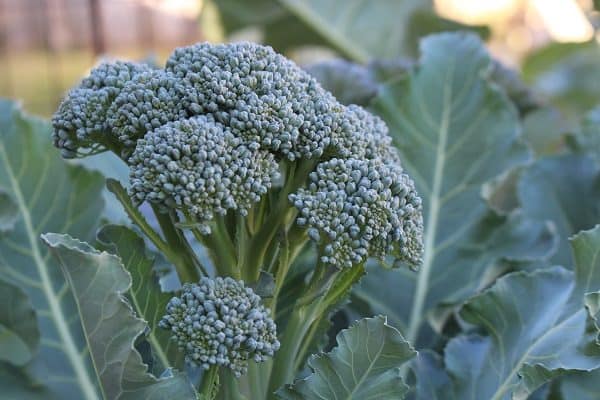 When I’m out in my garden, I’m getting Vitamin D from the sun, I’m grounding with the earth, I’m building my immune with the touch of the soil, I’m physically working my muscles in my arms, legs, and back, and I’m breathing in the fresh air. When I come inside from my garden my body is better than it was before I started. There is healing in gardening, not just by what you’re consuming, but by what you’re doing. I always feel better after I garden.

Gardening is great for family bonding. This is a time when both parents and children are home. Gardening can burn off unused energy, create a sense of calm, and allow families to share an experience together. Hands-on activities can also encourage young children to learn basic motor skills, work ethics, and other skills like learning colors and using basic math.

One more great aspect of having a garden is the opportunity to go beyond yourself. Gardening strengthens community. A garden, done right, is abundant. It can include an abundance that carries over to such an extent that you can’t help but give it away to someone. That’s the kind of life I want. And that’s what having a garden has done for me. 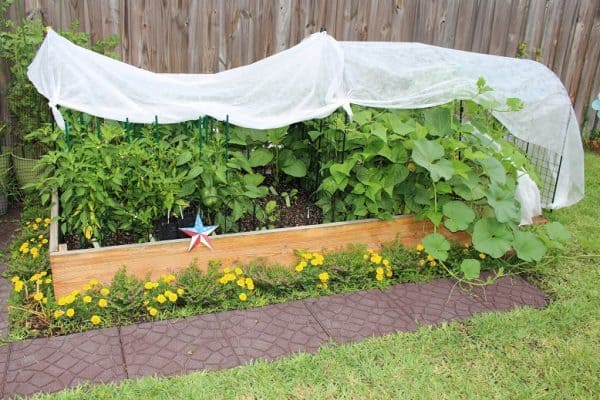 How to Start Your Victory Garden

The best way to start is with a plan. How much space do you have? How much time and energy can you afford? Do you want to use pots or raised beds? This site includes multiple articles to help get you started.

You don’t actually need a lot of land to grow enough fruits and vegetables. There’s a family who not only lives off of 1/10th acre, but they also make a profit in selling extra of what they have. You might not have 1/10th of an acre, but you also might not even need that much. 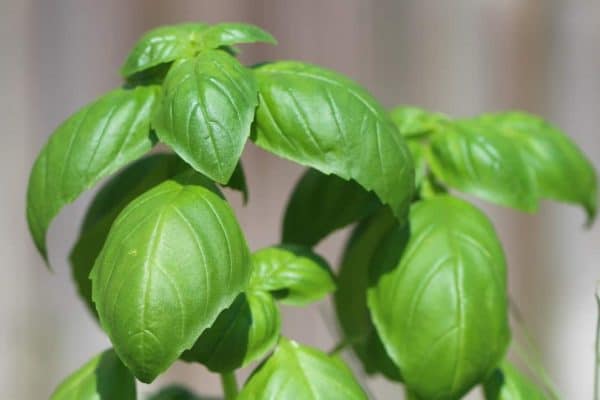 For starters, I’d recommend choosing a location that gets at least 6 hours of sunlight a day. You’ll also want to know your hardiness zone and the difference between warm and cool-season crops. Different plants grow during different seasons, so depending on when and where you start will play a big factor in what you can actually grow.

I would also recommend starting small! Even a pot with a few herbs is a great way to get your feet wet (and your thumbs green 😉), without it being overwhelming.

Garden planners can help you design your garden and also keep track of your progress. This is my garden planner. You can also use a plain notebook. Do what works best for you. When I first started, I figured I’d remember it all. I didn’t. Some lessons I learned a few times. And that’s ok, too.

The fun part is getting to pick what you want to grow. Order the seeds you want and grow what you enjoy eating. I started with cucumbers, melon, and corn. At some point, I started trying to grow things I had never tasted before (like kohlrabi, bok choy, and arugula). I discovered new vegetables and herbs that I enjoyed, as well as some that I didn’t. If it’s your first time, I’d go for something you know you’re going to like.

After you pick out what you want to grow, you’ll have to either buy seeds or small plants from a local nursery. When I plant I generally use Botanical Interests Seeds. They have such a wide selection of vegetables, flowers, and herbs. And they’re continually getting new seeds. They’re a reliable seed source for me. They also have a good selection of organic, heirloom, and non-GMO seeds. 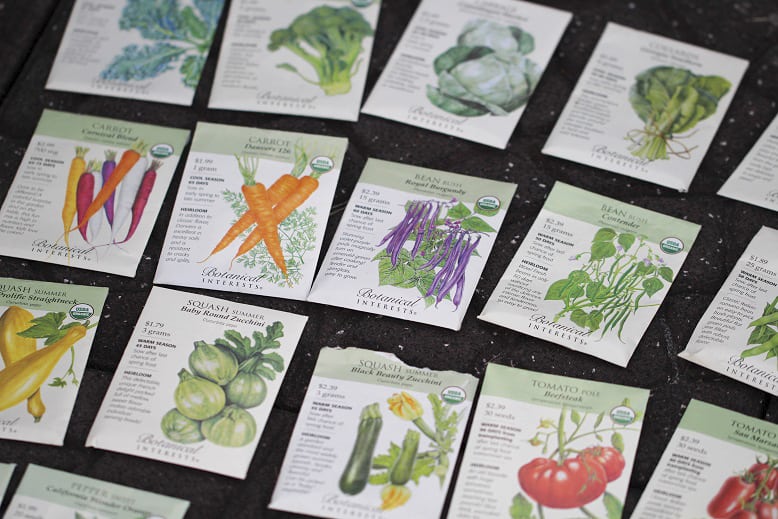 Some of my favorite seeds include:

Did you know you may already have what you need to get started with your own garden? You don’t necessarily need seeds to start. There are multiple vegetables, fruits, and herbs that you can start from scraps you might already have in your kitchen. 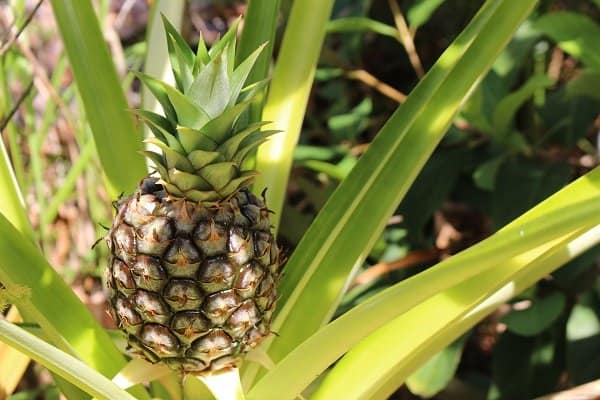 Your garden can be your seasonal supermarket. You can provide your family with the freshest and most nutritious food. If you’re in a situation where you have to stay home, or you’re living on less income, take advantage of the opportunity to be empowered and start your own victory garden!

Have you started gardening since COVID-19? Comment below! I’d love to hear from you. 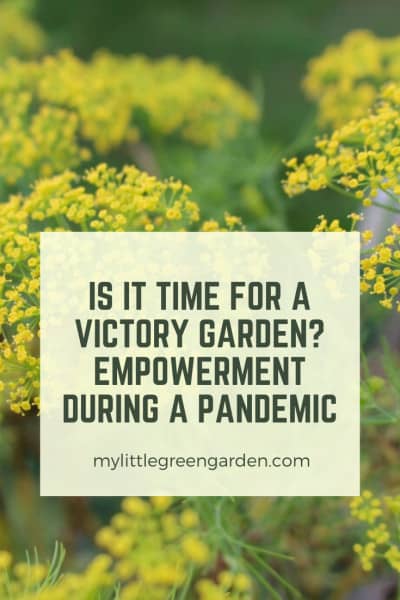